In 2012 we launched SUMMER HEROES, an art-based intervention with children between the ages of 6 and 10 that sought to promote self esteem, creativity, expression, and positive, powerful thinking among young people.  Art therapy was introduced through consultation with a licensed art therapist and psychotherapist and the hiring of her services for specific components of the workshop. The creative activities were fashioned by Summer Heroes while liaising with the therapist and a curriculum was formed.

Reaching 124 children from 16 local homes this project was immensely successful growing in scope and possibility.  At it’s conclusion we were able to contribute art materials, books on art, certificates, and a publication of the drawing collection to each child.  They were also treated to a field trip in December.

As SUMMER HEROES expands, the mediums each year, the focus and the reach will vary. At the core of the project is the concept, – asking children to invent and explore their invented secret super hero identity, personally fashioned after their own positive sense of self.  The Drawing Collection continues as a separate entity with a public call for local, regional and eventually international participation, and whose proceeds can sustain the charitable interventions with children from various homes. 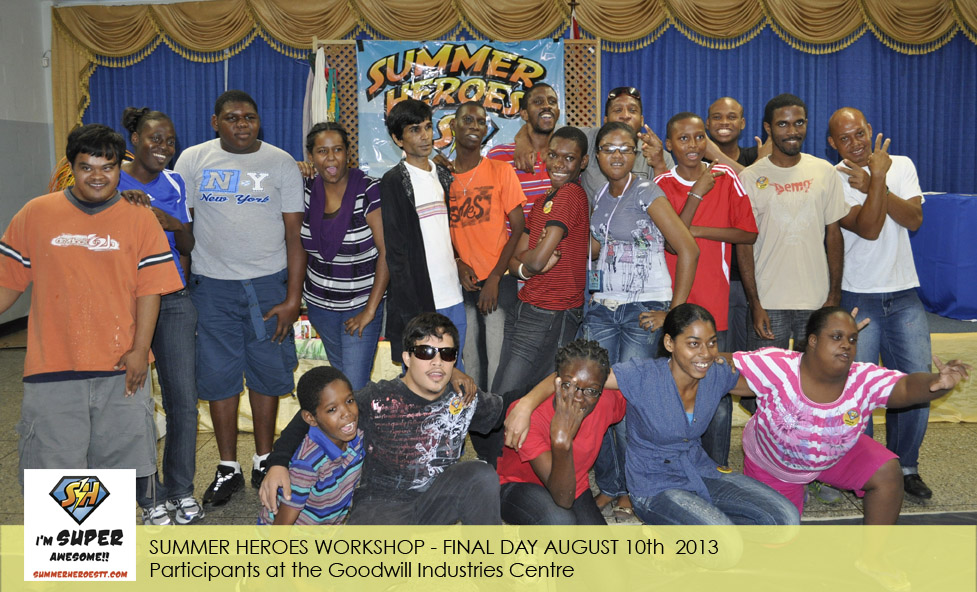 The 21 heroes (two are absent at the time of this photo) are students of the Goodwill Industries with varying special needs such as Autism or cognitive learning delays. What do they look like as superheroes? Some have tie dyed capes, papier mache masks made from old comics, or belts and protective devices made from reusable materials like egg cartons, plastic bottles or toilet paper rolls. 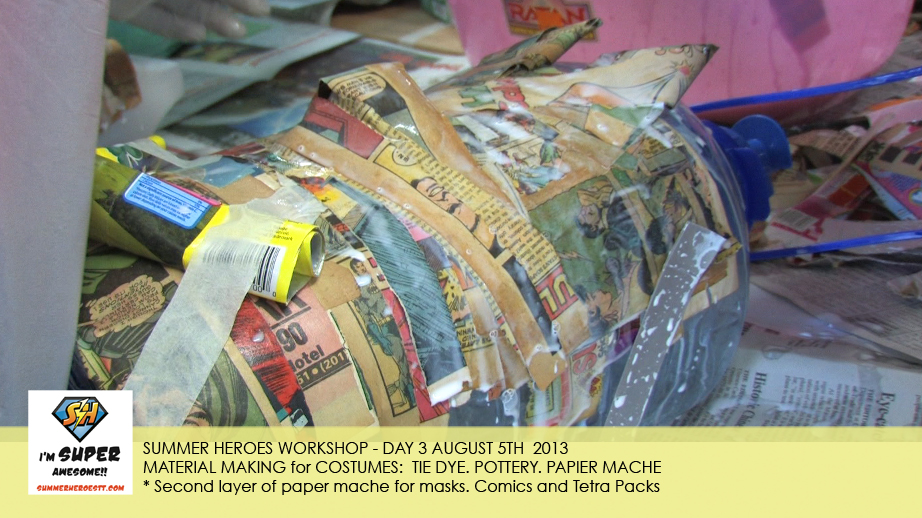 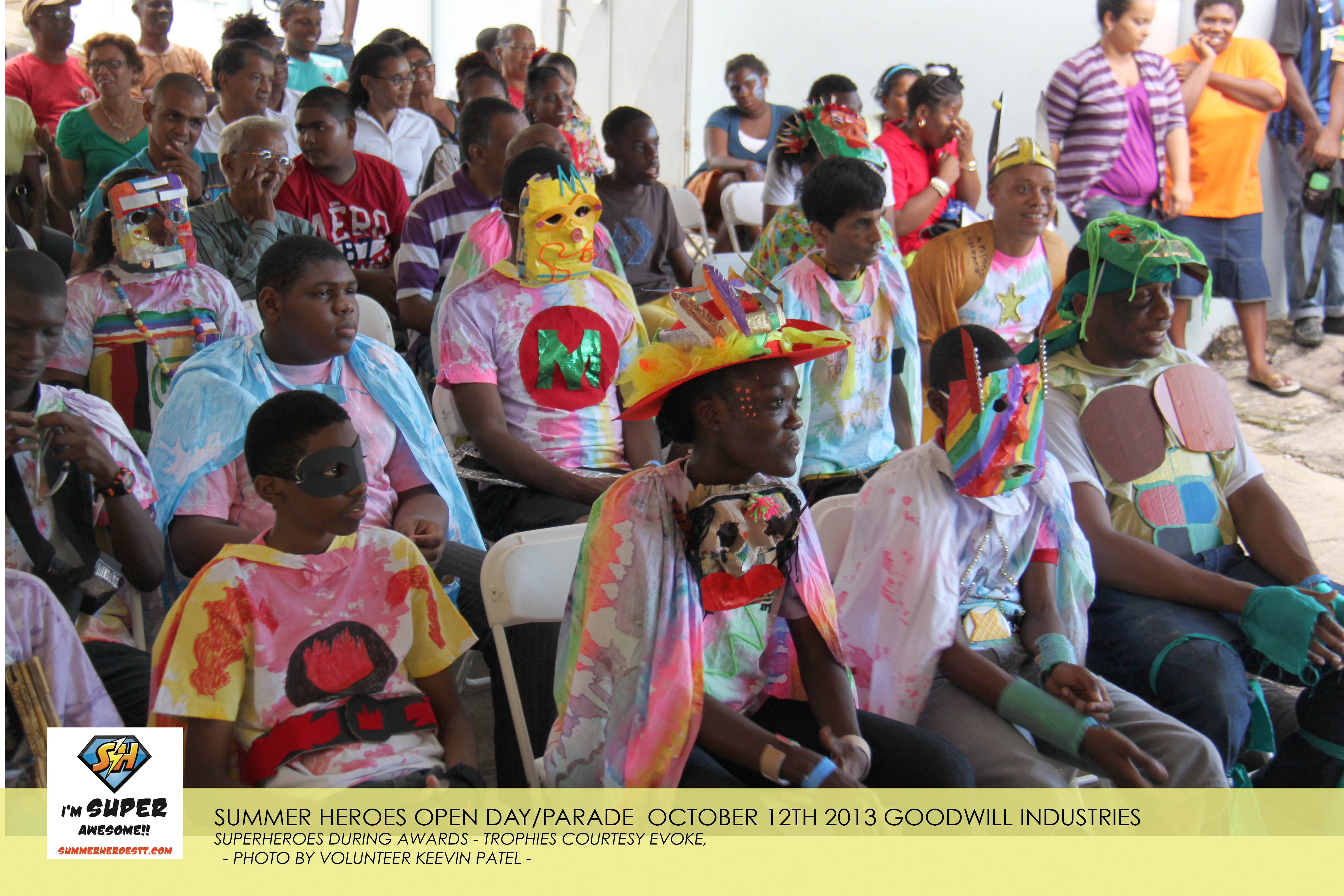 This year we concentrated on the environment and invited conservation groups to encourage the heroes in making costumes in an old mas style using reusable materials. 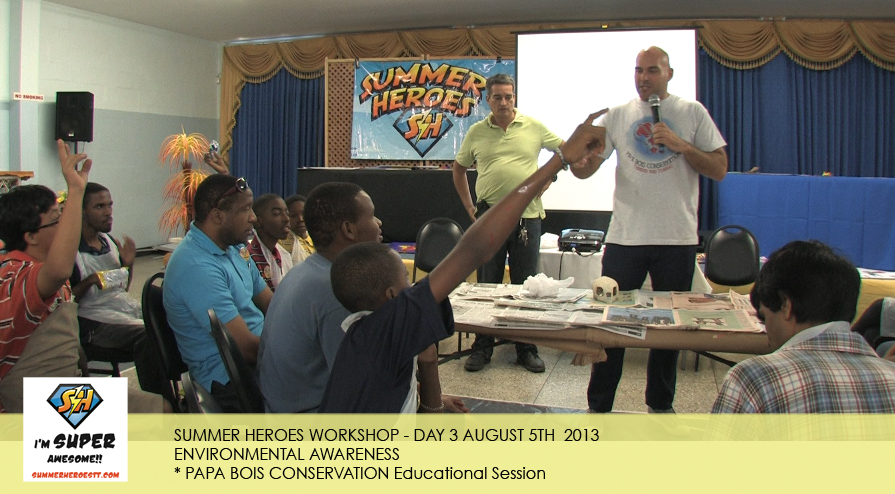 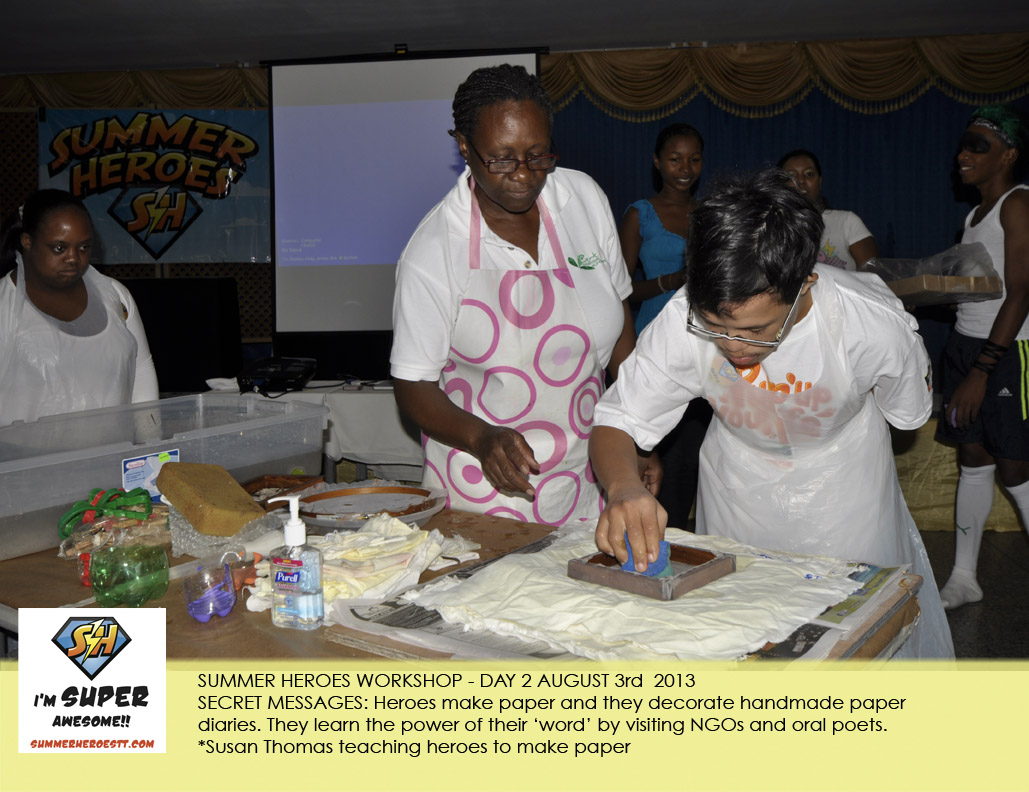 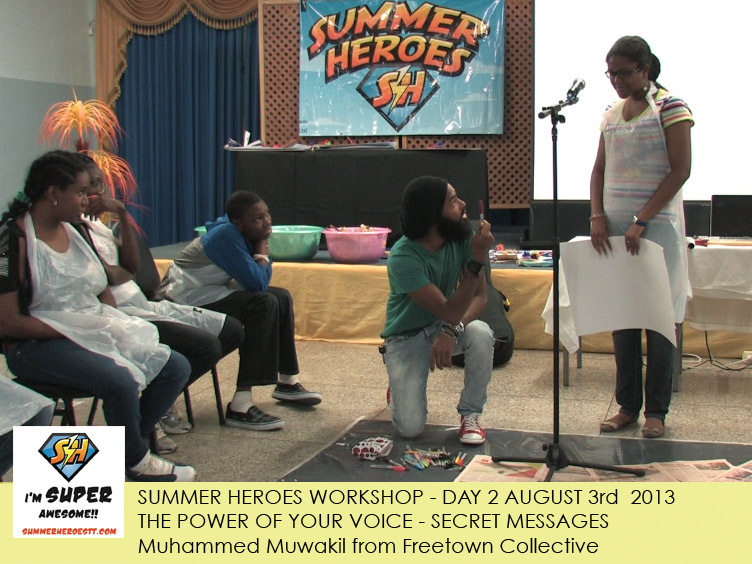 For example, Learning to Fly was the day for making capes as well as learning about possibilities and opportunities, and Mask Making was the day to create masks as well as to challenge the notion of identity – the therapist encouraged them to emphasize their inner identity instead of using a mask to hide’ In total the Workshop had seven core components. The workshop had its development sessions in the morning while the heroes made different elements of their costumes in the afternoons. At the end of the week emerged 21 more self assured, socially conscious and responsible heroes who understood the link between being heroic and doing good deeds in real life.

SUMMER HEROES was formed in 2012 and is sponsored in part by social enterprise Trinidad Home Studio Ltd (THS). In 2013 the project made a significant leap from its usual drawing collection of heroes to a full curriculum and art exhibition. We developed the programme further, deciding to impact less in quantity but so much more in quality. We are concretizing templates that work to implement them on a more nationwide scale in the future.

Following the Workshop the public was invited to an OPEN DAY at the Goodwill Industries. Here the work created by the heroes as well as their created costumes were on exhibit and kids and young people joined in fun and creative activities including Go Carts, Water Slides, Bouncy Castles (Events Land Limited), art activities, paper making, magic shows, zumba and more. All were welcomed to attend dressed as superheroes. 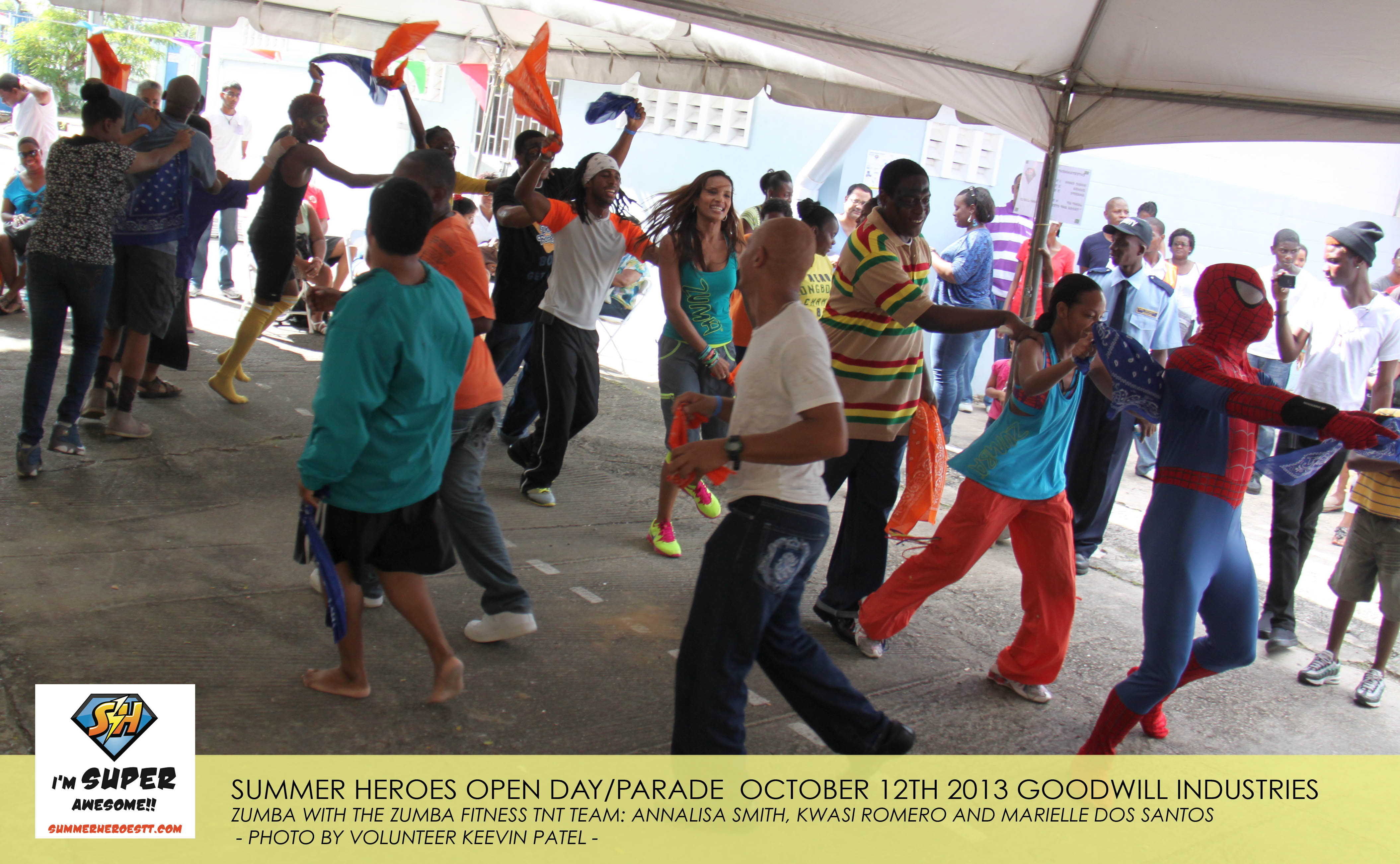 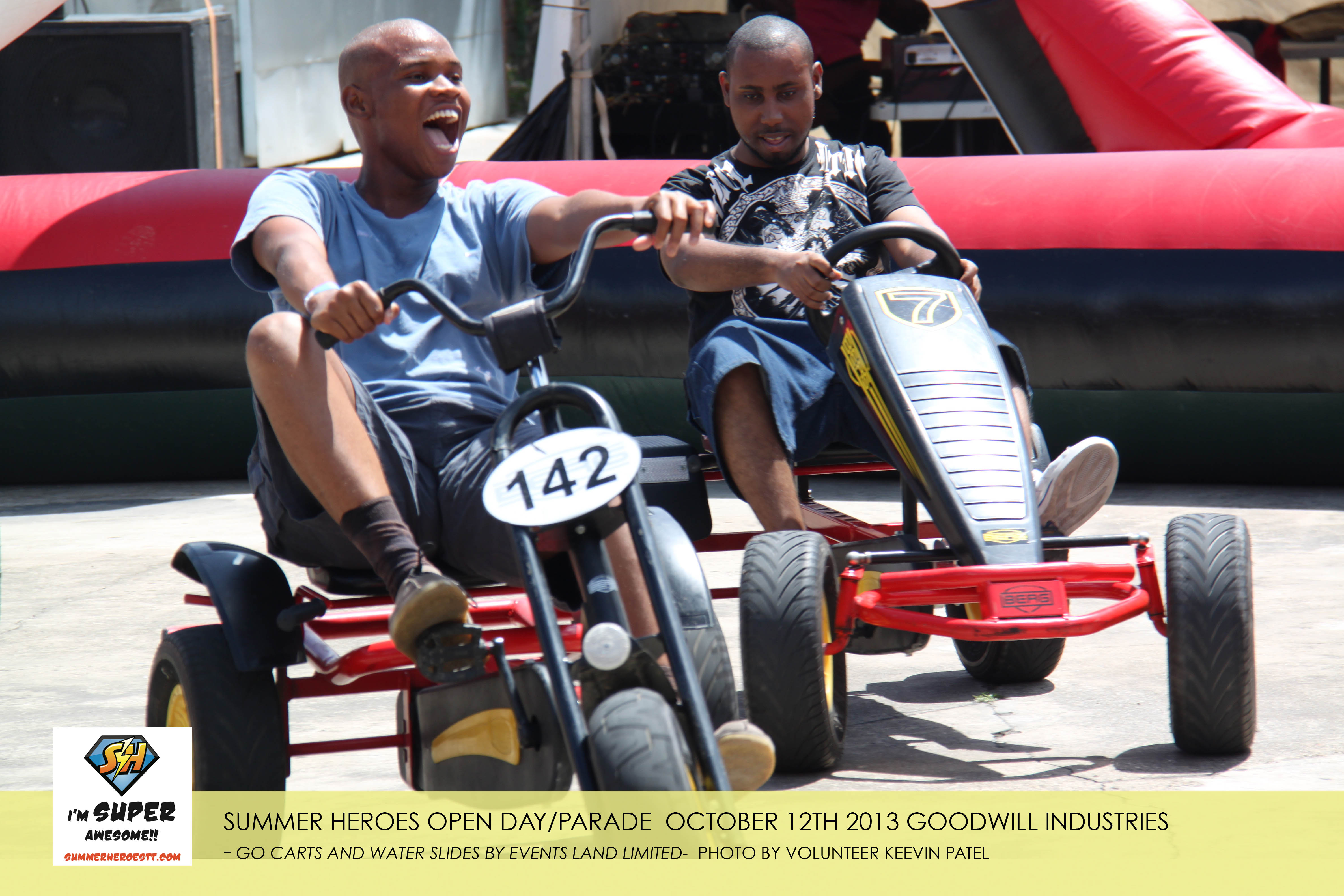 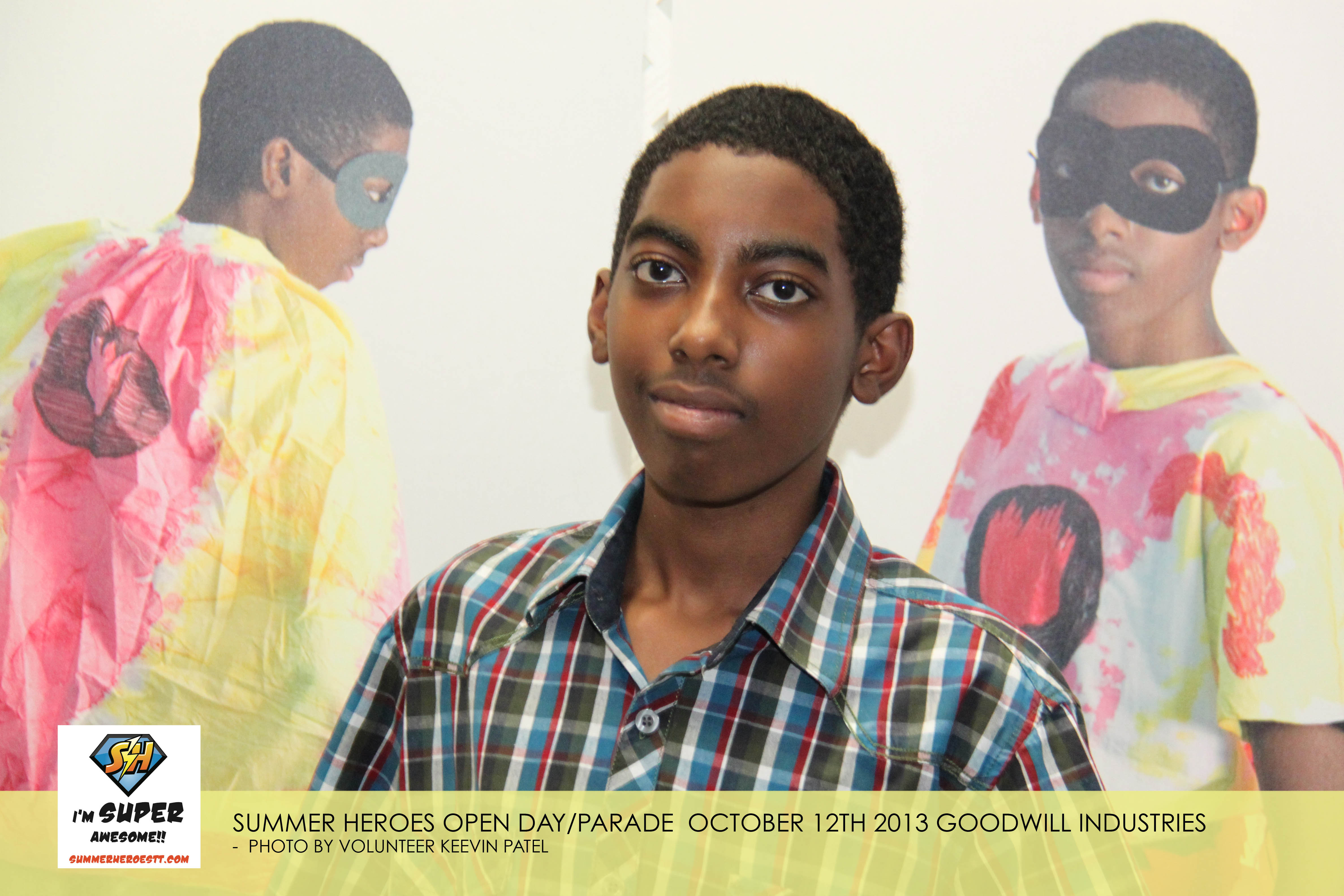 After the fun activities concluded there was an Awards Ceremony where trophies and special gifts specific to each child were distributed (see photos for sponsors and donors).  There was a surprise performance by John John ( artiste). As the Open Day concluded tassa, steelpan and moko jumbies accompanied the heroes who were in full costume in a public parade in the street outside the Center up to the Stadium. 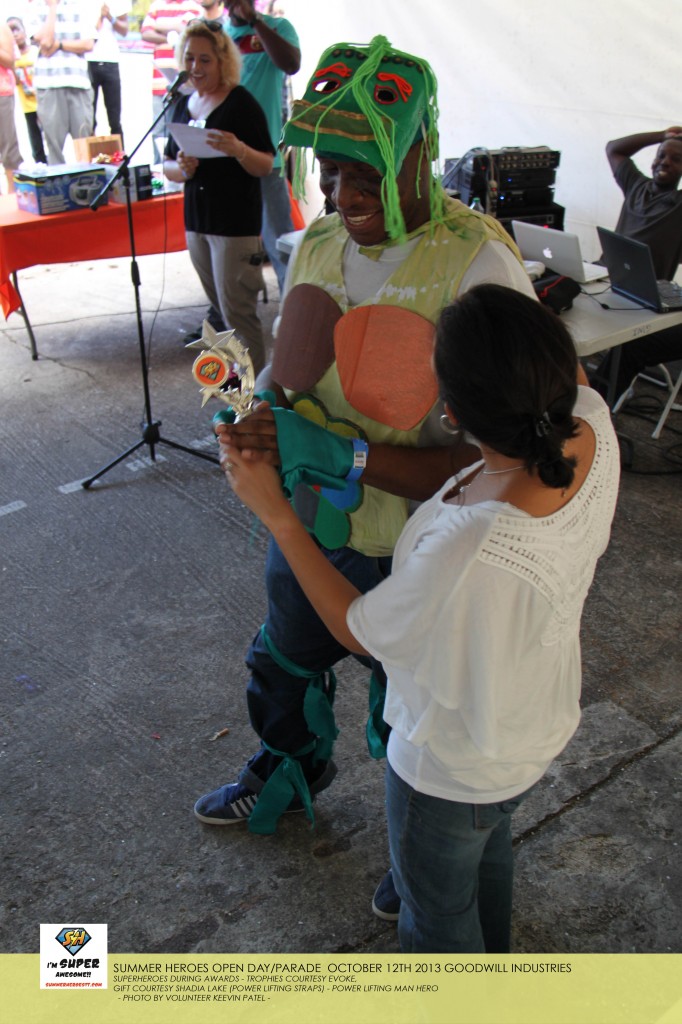 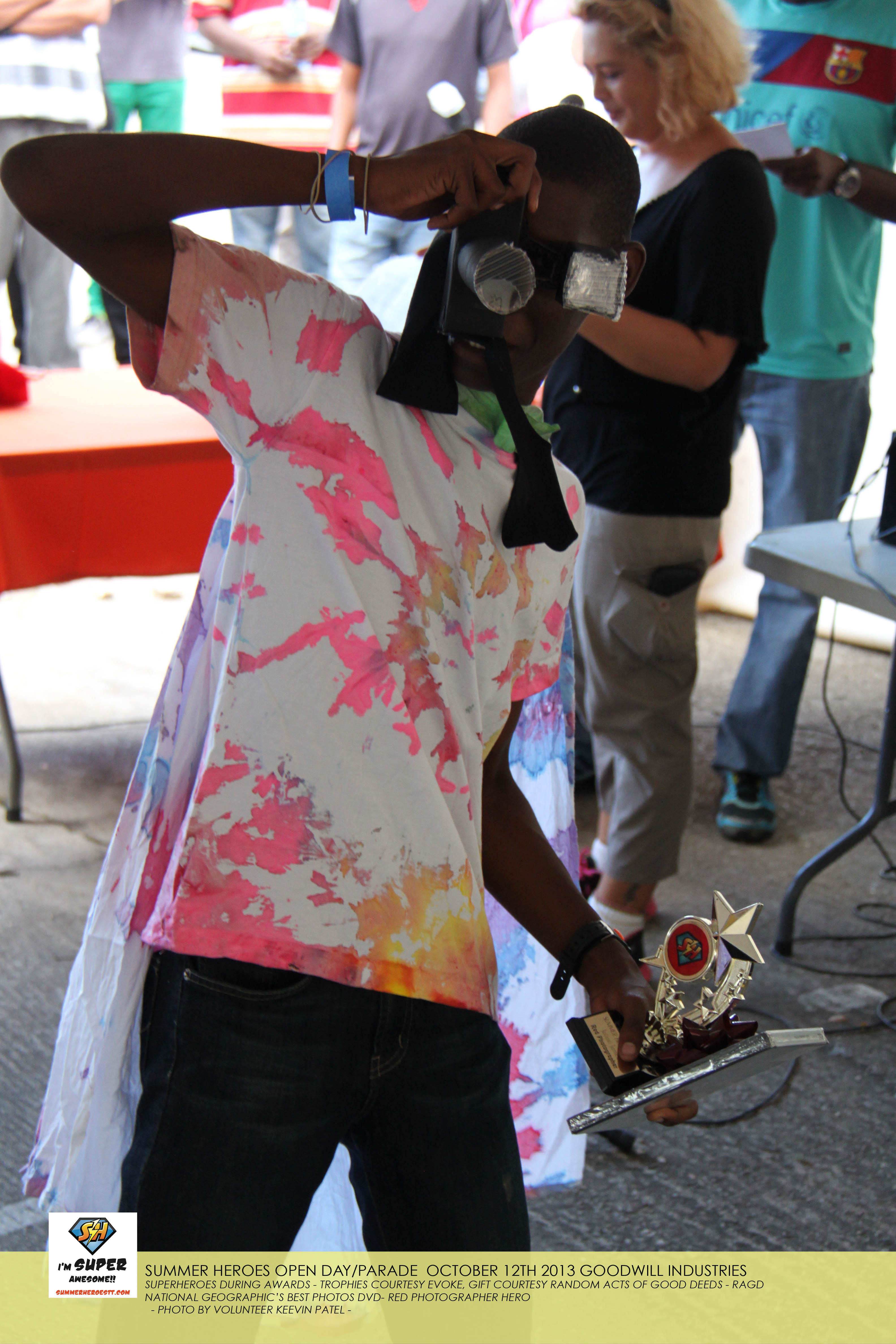 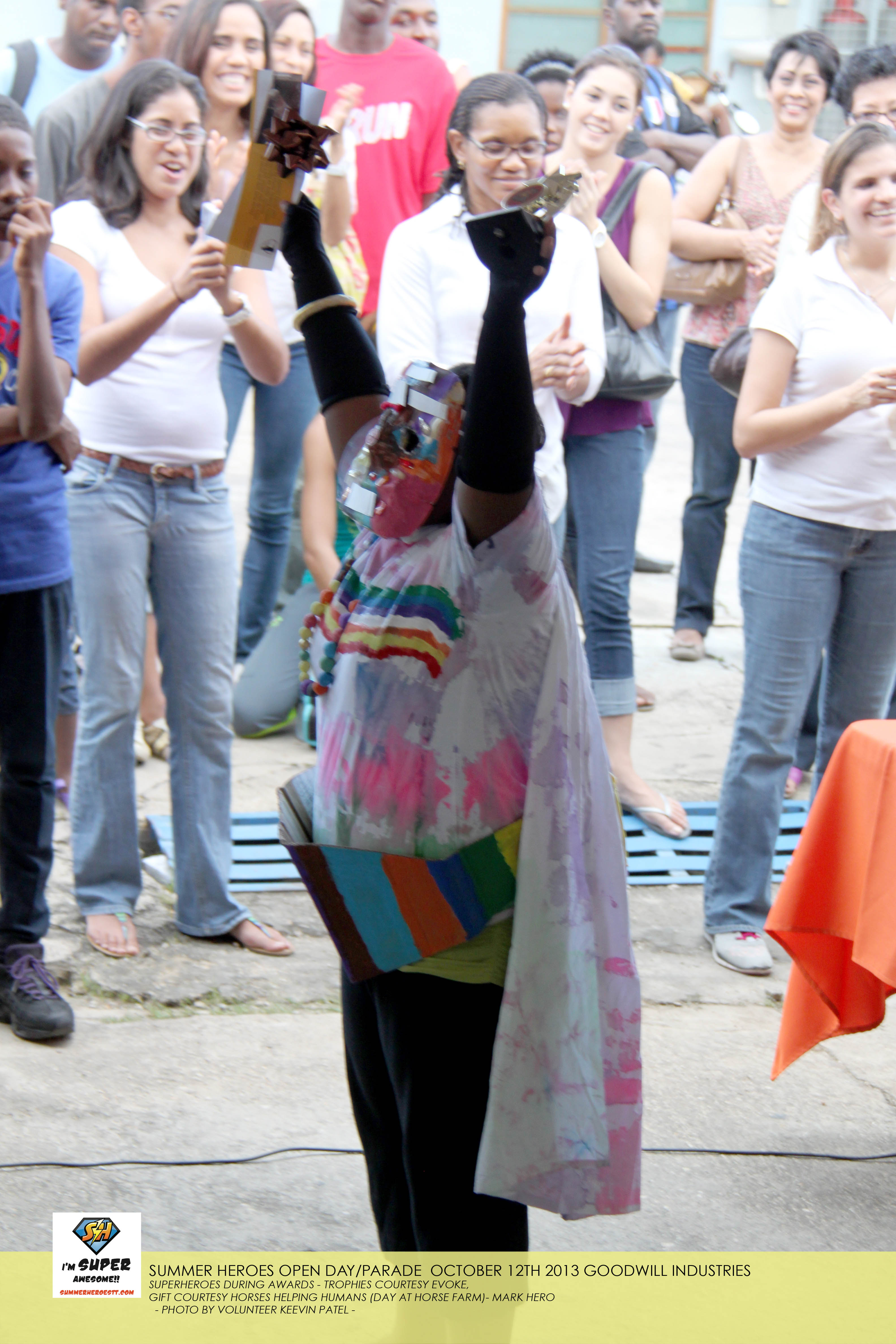 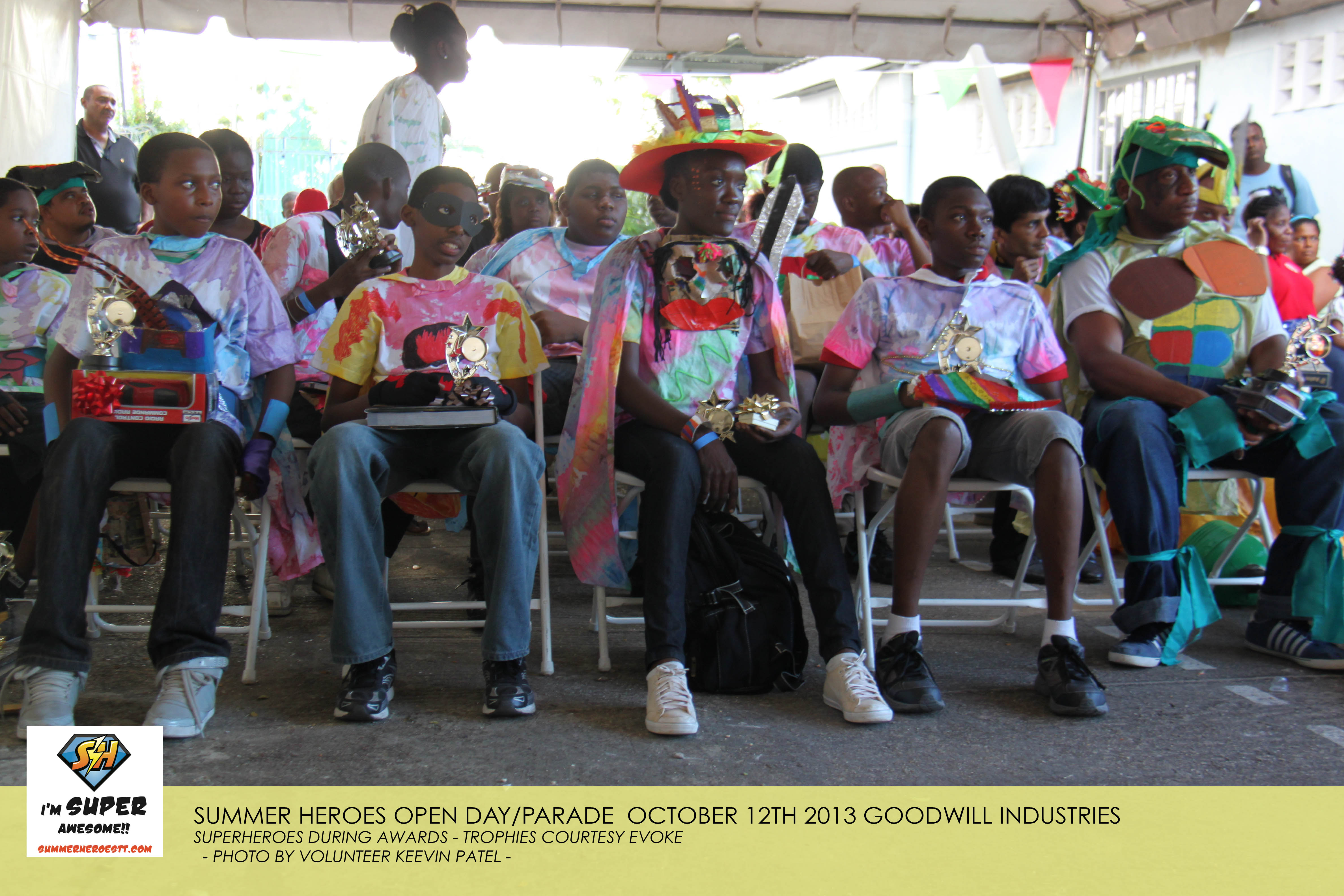 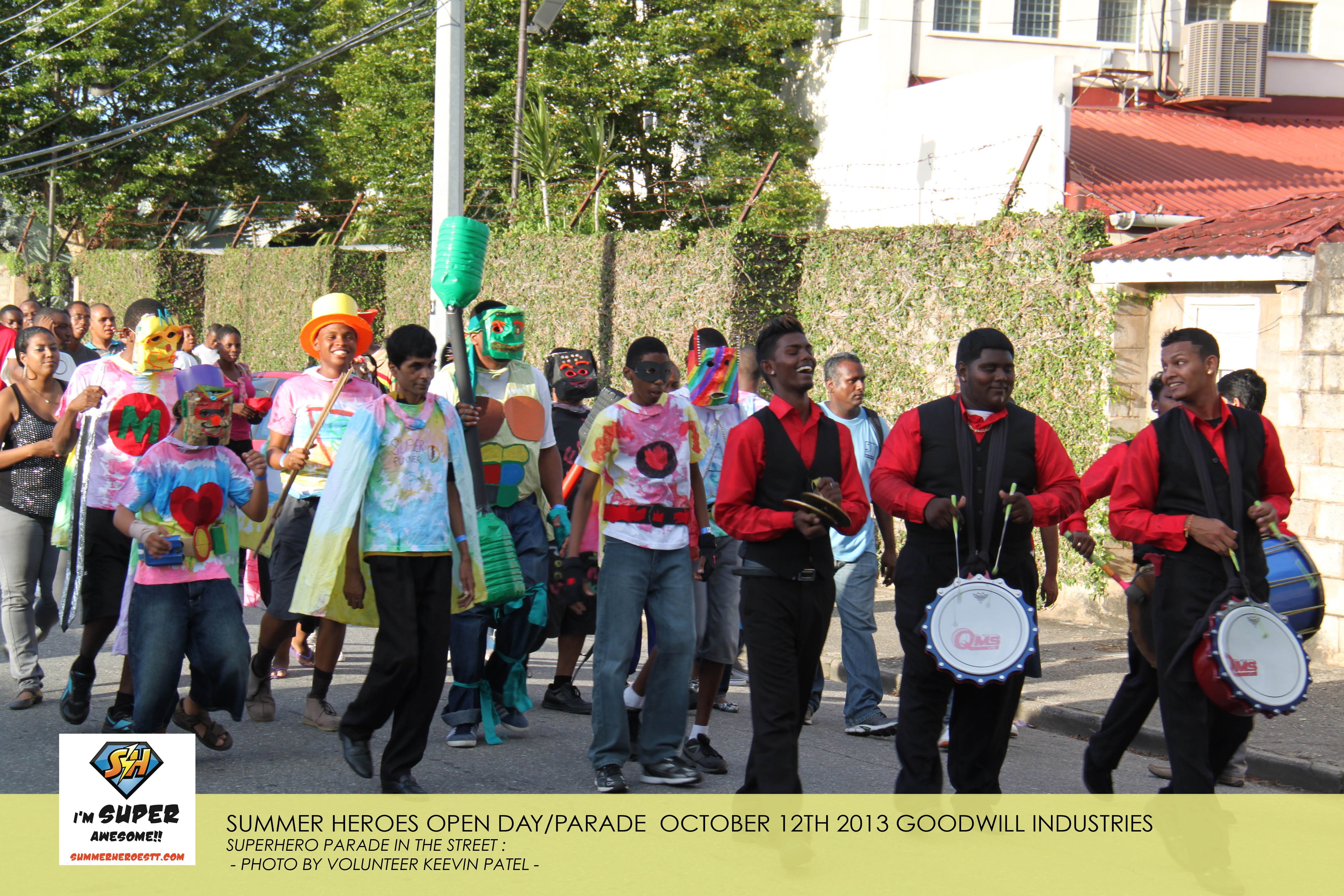 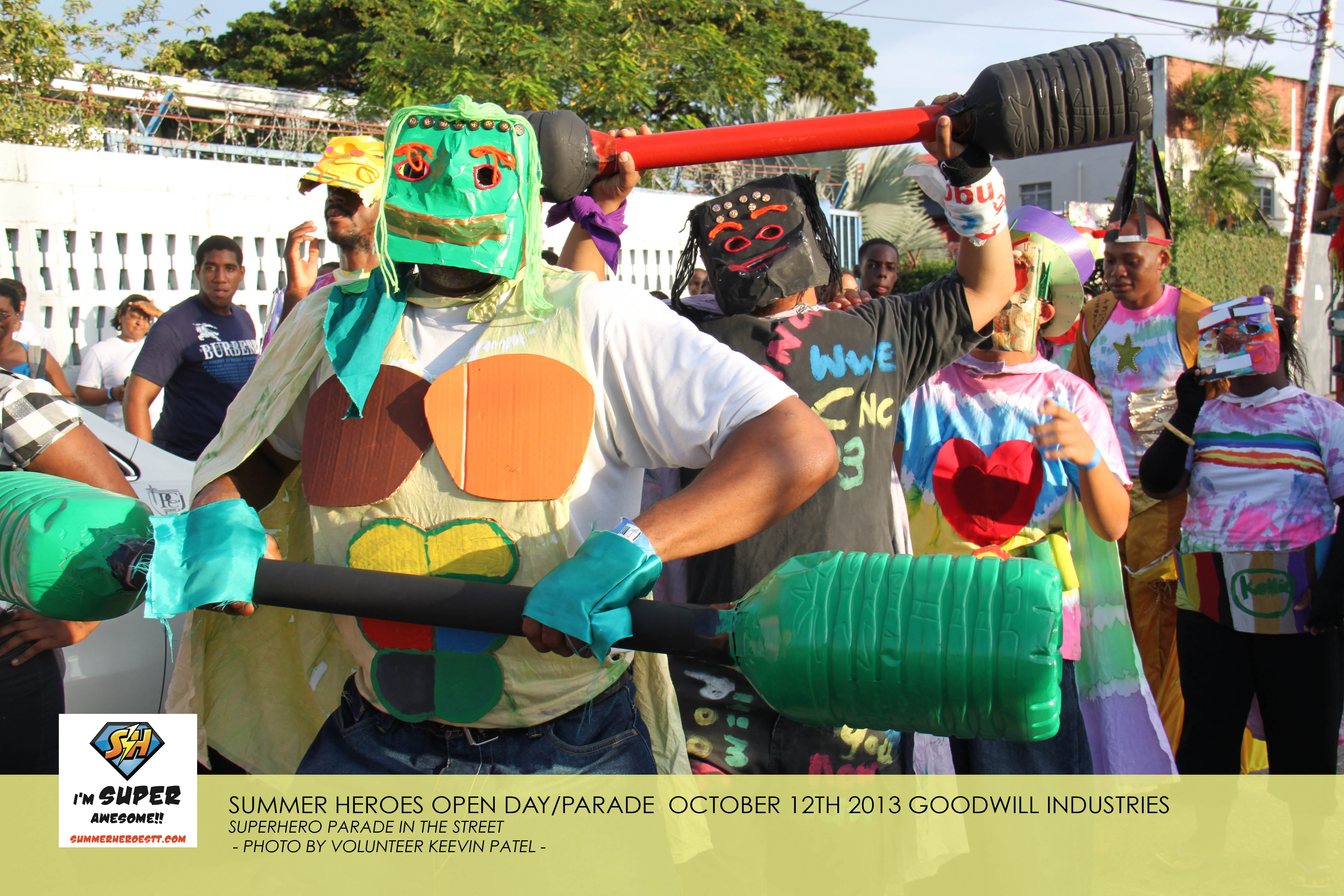 The final component of the 2013 programme was the photographic exhibition entitled 21 HEROES sponsored by Atlantic and hosted at Granderson Lab, a contemporary Art Space in Belmont. The exhibition included a full archive of 42 large scale prints suspended in the space – each hero had an image of them in full costume including their mask and another of their portrait in real life- costuming without masks, showing their real faces.  A video loop also featured clips from the overall programme – workshop and parade.

Usually when art therapy is pursued in a clinical environment between a therapist and a patient, their drawings are confidential and hidden. This is because their primary purpose is to function as psychological assessments. Summer Heroes as an empowerment programme promotes visibility as it’s core focus is different. We are teaching children and youths to be proud of themselves and their creations and to own their work, their imagination, and their sense of purpose boldly.  If funding allows, future programmes may also consider a parallel component including clinical psychological assessment with art therapists where the work produced for that purpose is not made visible. 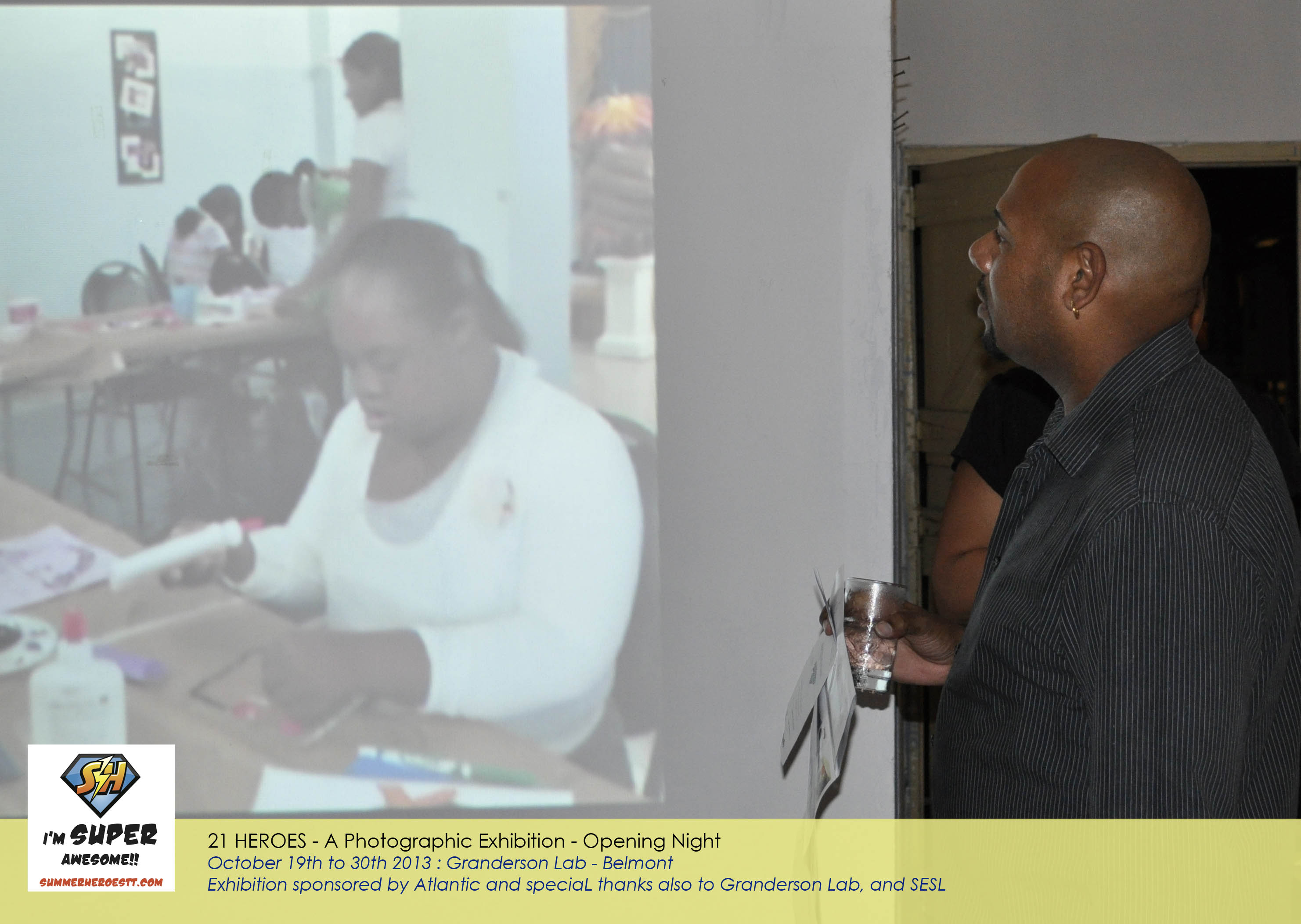 This year’s programme was amazing. Many thanks are owed and this programme could not become a reality without their help. Firstly to Goodwill, to the sponsors of in-kind products as well as monetary donations (see list) to cover logistical costs. There are so many people who lent a helping hand such as volunteers who came on workshop days and the Open Day for hands on assistance and the Volunteer Centre of Trinidad and Tobago, individuals who bought gifts for the heroes from our wish list, those who spread the word, the supporting organizations and NGOs, the artists, therapists, paid and voluntary professionals, the press, every single person who supported us be it friends, family or strangers. And most importantly – saving our best for last – The wonderful heroes who touched our hearts and had some of us almost in tears at their outpouring of emotion and love. THANK YOU. 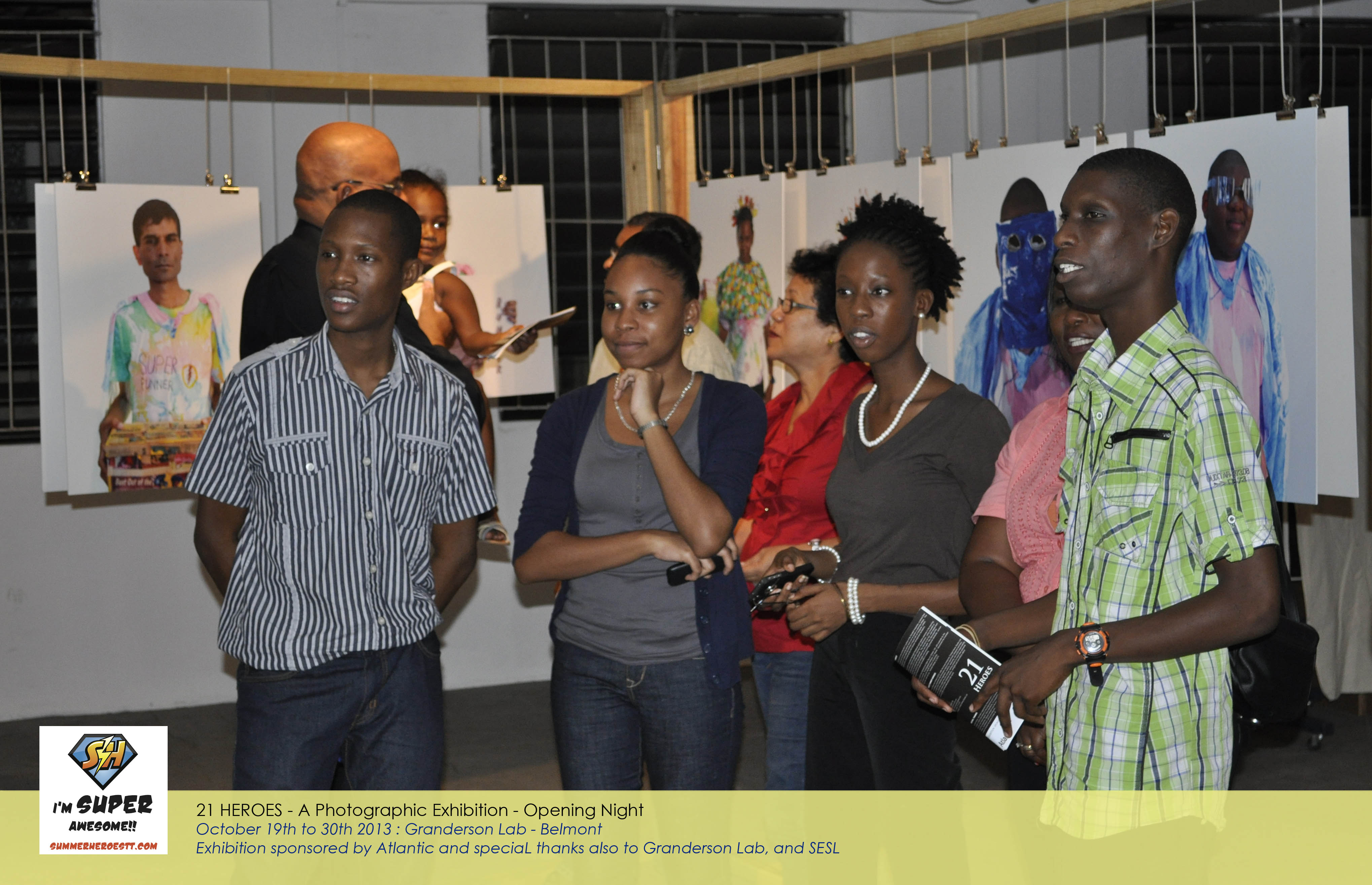