‘Half Woman’ is a 10 year old superhero.  “When I am angry or sad I draw. I just keep drawing. Sometimes I write,” she says half smiling. As one of 124 heroes from the 2012 SUMMER HEROES programme, ‘Half Woman’ manages to briefly express why this art programme focused on imagination, creative play, and artistic process as a therapeutic exercise even exists. 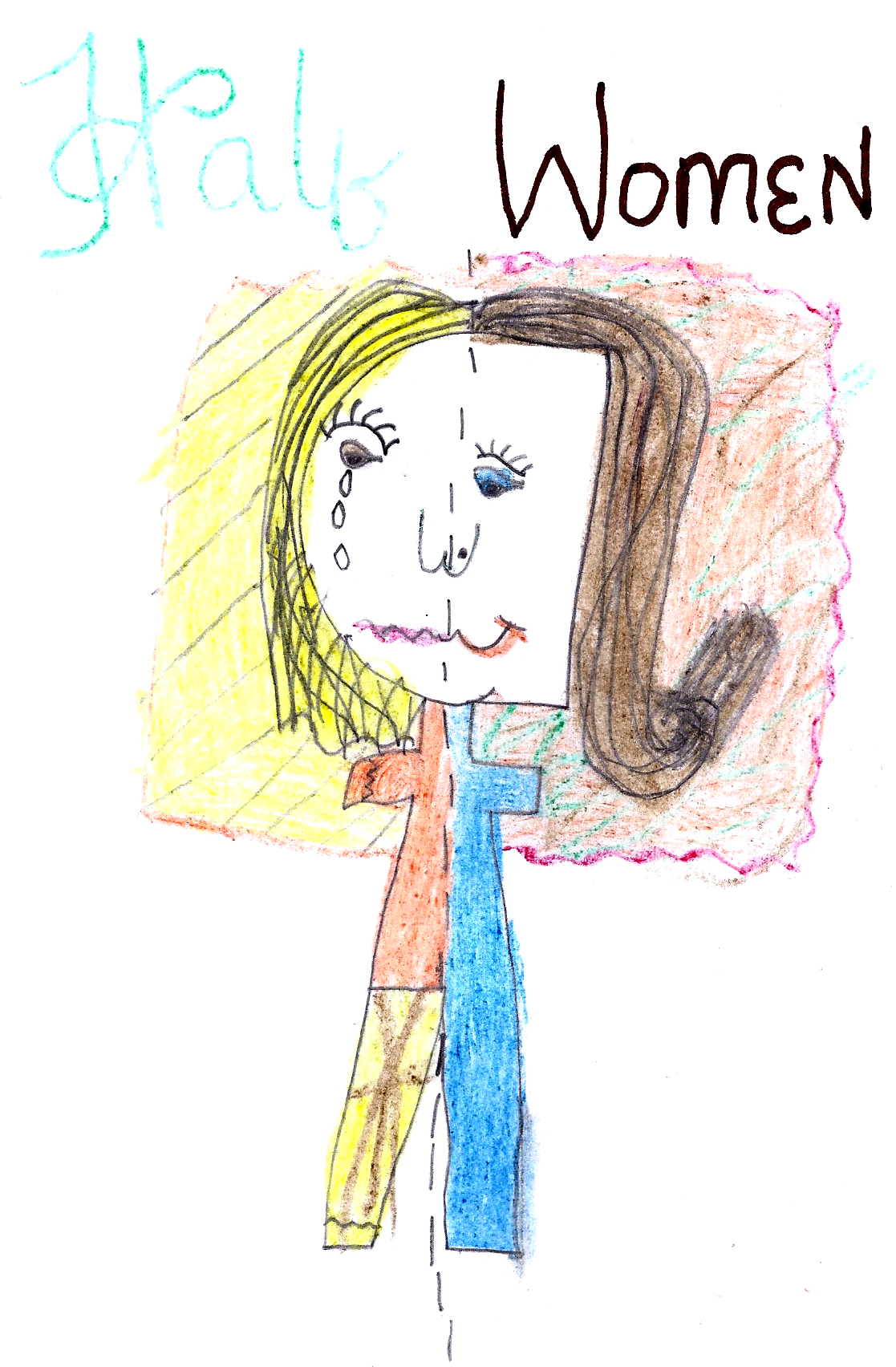 What is art therapy? From a clinical perspective and authority it is a form of therapy that is practised only by licensed art therapists whose medical background is in psychology or psychotherapy. 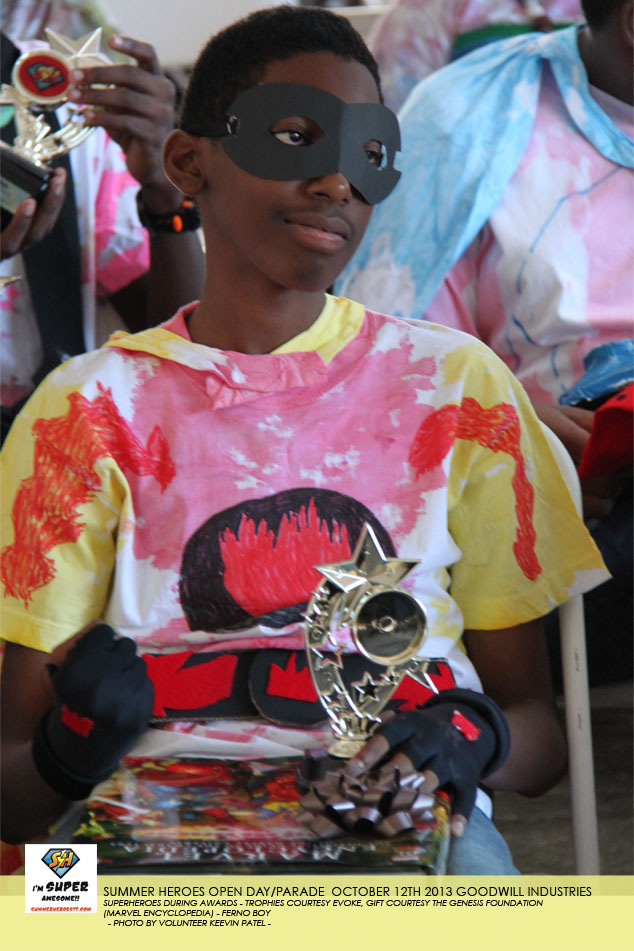 SUMMER HEROES may hire art therapists for some of it’s activities and consult with them when formulating it’s curriculum, but the programme itself is more of an intense art-based project that champions the belief that art can be therapeutic by promoting self awareness, imagination, problem solving, philosophy, and the freedom of creative expression. 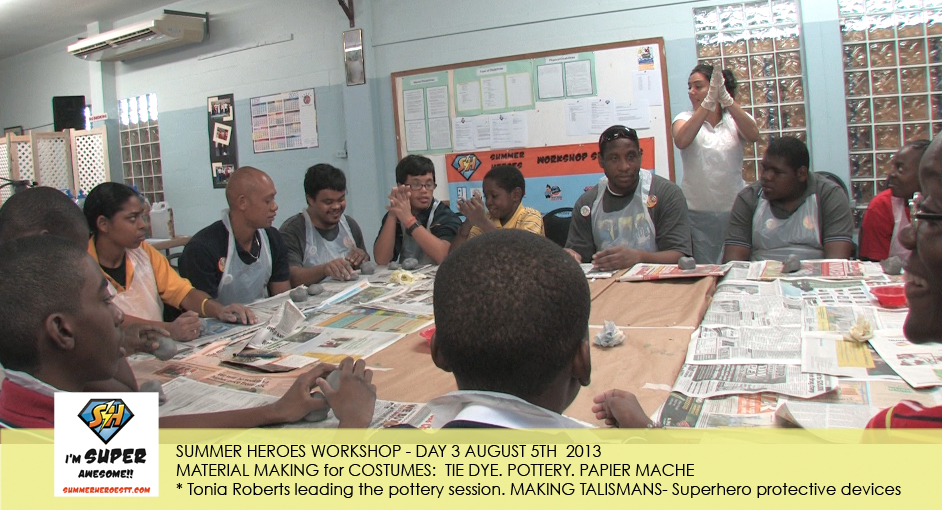 In 2013 this project took flight with 21 special heroes from the Goodwill Industries.  These students with mild to severe cognitive delays including Autism, Dyslexia and Asperger’s Syndrome invented their superhero avatars and constructed their own costumes using reusable materials and methods involving paper making, tie dye and clay work.  Visiting oral poet Muhammed Muwakil reassured them, “ don’t ever let them tell you that you’re stupid or not good enough. You’ll have helped me here more today than I helped you. You’re so talented. Let them hear your voice.”

‘Fandango’ and ‘Power Lifting Man’ shout “Yeeeeah!” These two superheroes are best friends in real life and have travelled across the world as power lifters. Their superheroes are stronger versions of themselves with papier-mâché masks and abdominal muscles painted on packaging board, glued firmly to their jerseys.

Like all of the superheroes in the programme they are asked to envision themselves in a powerful and creative light. To channel superpowers, ambitions of social progress and their own personal talents and strengths into an original superhero icon created by them.

‘Mighty Man’ is another talented hero, producing over 30 drawings in addition to his portfolio at the workshop, greeting us daily before class began with ‘Miss where are the crayons. I need to draw something.’ 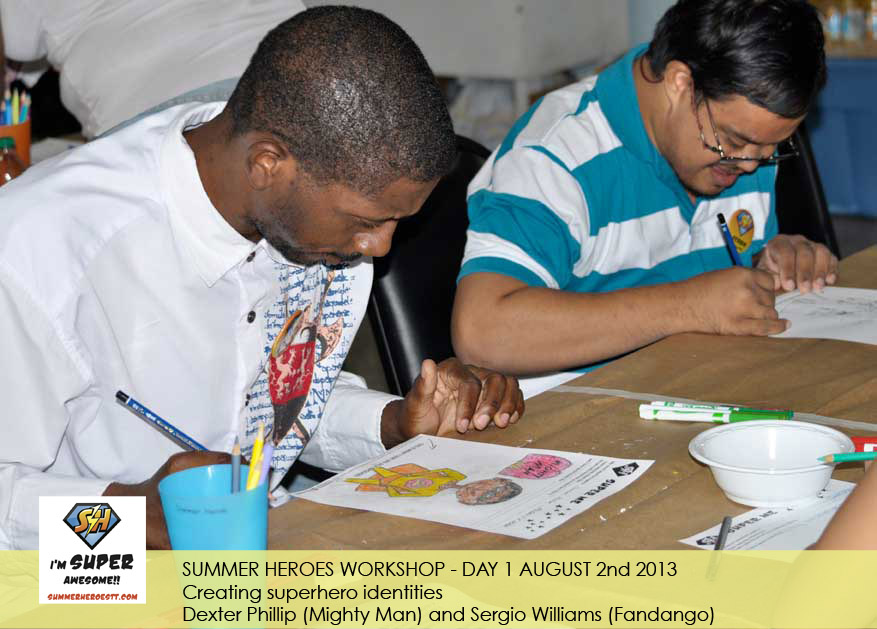 These heroes completed a week-long workshop, learning and making art, interacting with professional therapists, artists, artistes, facilitators in performance and character development, activists and NGOs. Development sessions were coupled with creative sessions and time to make costumes. They constructed ‘Safe Spaces’ out of empty boxes, ‘Talismans’ and ‘superhero power gadgets’ out of plastic bottles and egg cartons. The results were amazing. 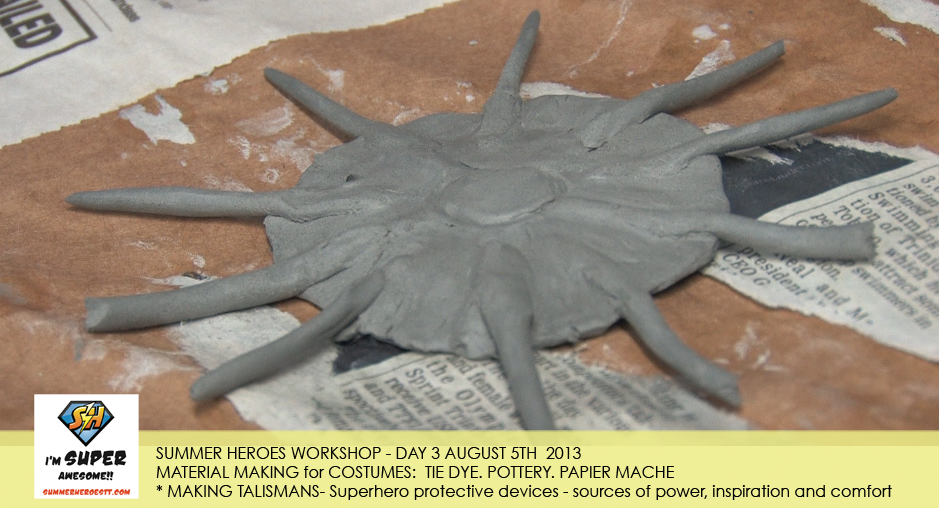 ‘Ferno Boy’ was extremely meticulous, so much so that he corrected facilitators when speaking of the superheroes from DC Comics and Marvel. He knew every detail about them and was fascinated in sketching, painting and creating the ‘mas’ for his costumed hero. “I only have black and red on my costume,” he declared, “I know exactly what I’m going to look like.” 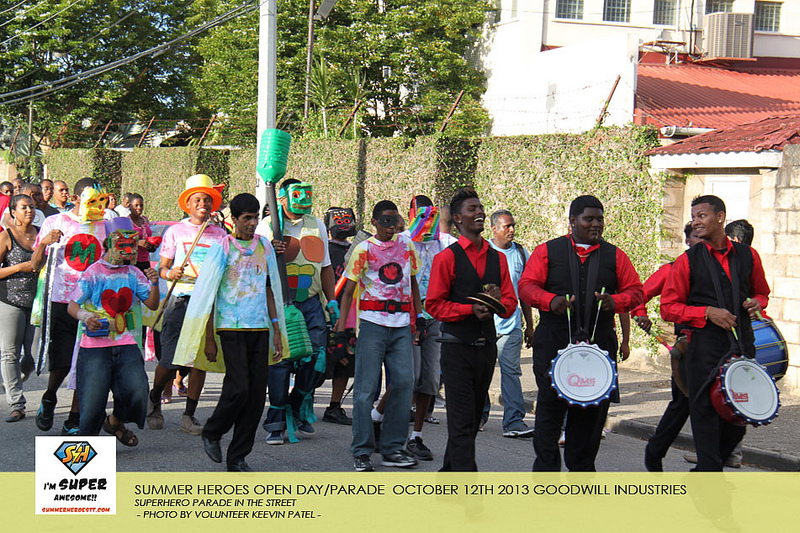 This workshop culminated in a public Open Day where heroes and visitors paraded on the streets outside of Goodwill, celebrating with Steelpan, Tassa and Moko Jumbies.  Their work was exhibited here and at their official exhibition at Granderson Lab in Belmont. 42 large scale portraits (with masks and without) were suspended in a minimalist art space and video clips from their overall experience projected onto the walls. 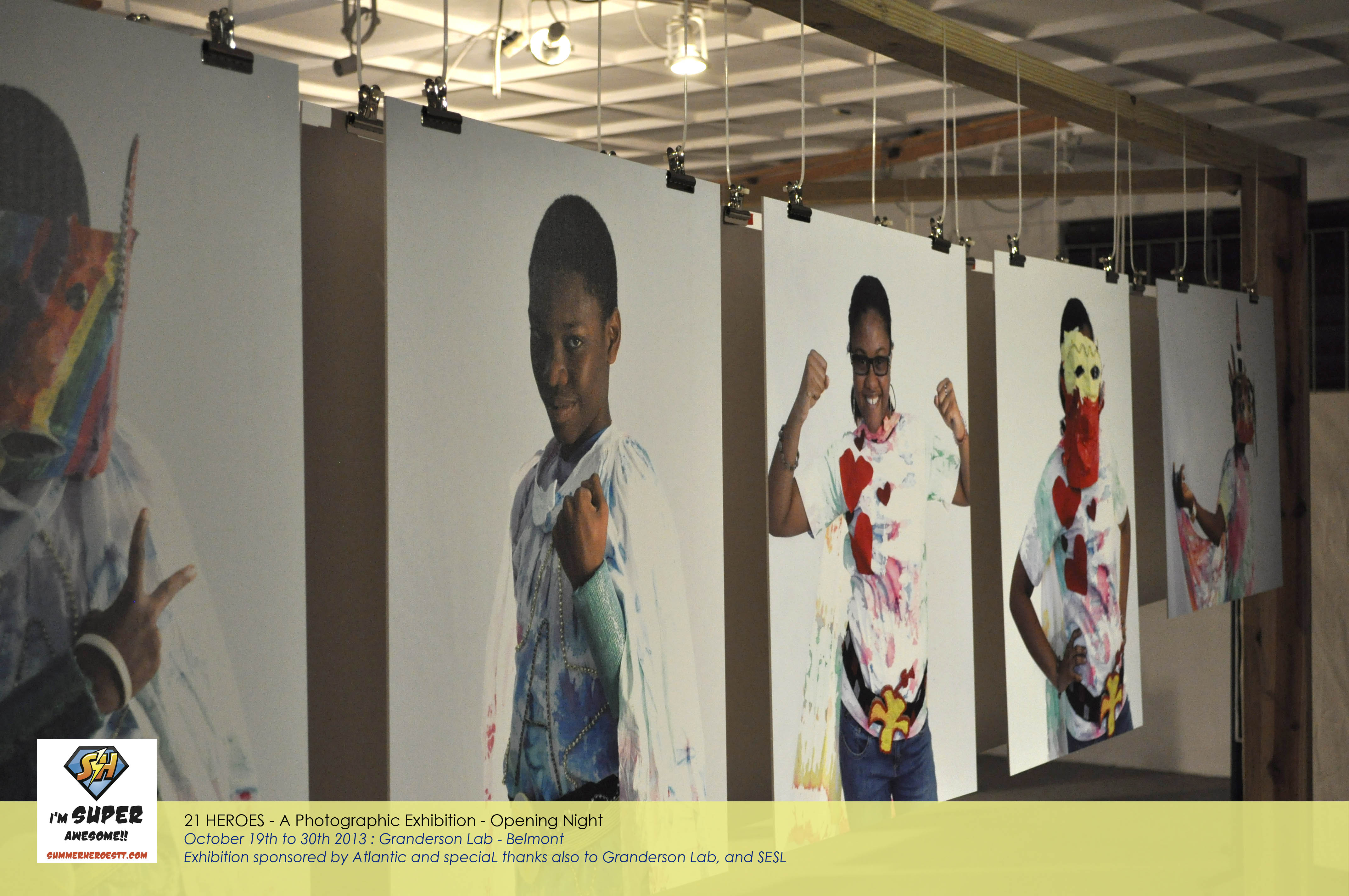 ‘Red Photographer’ poses by his portrait. His mother ask us if we know of any photographers who can give him lessons. His costume has a camera made from a juice carton and a toilet paper roll. In his other hand he carries a pro consumer Nikon. “Really,” she says, “this would really make him happy.”

Another proud mother is there with her daughter ‘Super Awesome.’ “In school they would abuse her, call her slow and even slap her sometimes. Thank God she is in Goodwill now,” she confides. ‘Super Awesome’ was inspired by the workshop and is planning to continue tie dye. According to the Goodwill CEO Mrs Barbara Alleyene “Some of these children may never read or work in average jobs. These skills they learn can help them to pursue an avenue for potential income.”

‘Super Awesome’ is incredibly quiet and is staring at her portrait. When asked if she is okay she responds, “I could just keep looking at it you know, I can’t believe it, that’s me there. Wonderful. I love it.”

As 2014 begins, some of the 2013 heroes will be featured in SUPER ME, a docudrama that interviews and dramatizes some of the superheroes from the overall programme. They discuss social change and problems. They talk about the importance of art and education. They all talk about crime. 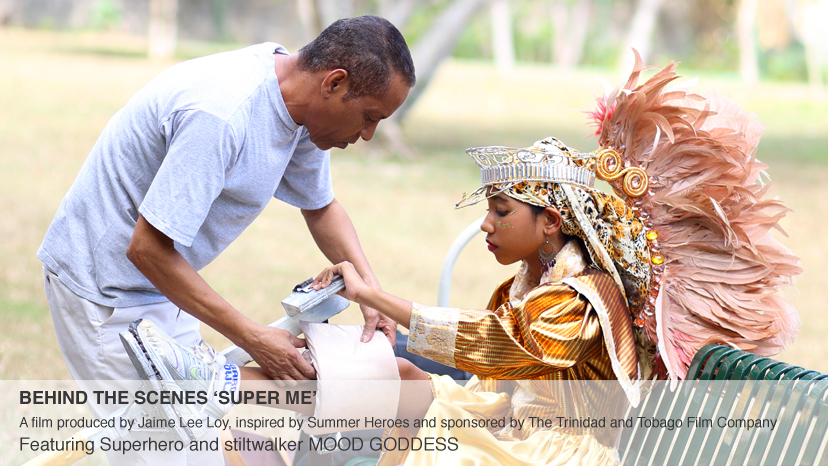 One of the most powerful and recurring comments from the heroes -some barely eight years old – is a conviction that art, the ability to imagine and fantasize and create, is something that can save society, and something that can destroy it if it is denied.  Some of our heroes are survivors from abusive homes, are escaping sexual tyranny, or have been abandoned.

One of our heroes still waits for his mother who he knows will not return. “When I feel to fight I just go and do something else. If I can’t draw I might close my eyes and think of another place. I might write about it or read.” He is only 9 years old. And he admits to us that “people don’t realise how bad things are in this country,” saying “Don’t they realise we have to change their minds, to give them something to feel good about themselves?”

A few months ago students at the University of The West Indies in St Augustine protested the university’s resolve to move the creative arts facility in favour of a car park. The students sang, beat drums and danced on the pavements. They picketed because they were not consulted first.

The heroes from this programme have much to say about this very type of problem. Through their imagined good deeds, powers and superhero missions, they are designing an improved version of themselves, and they all begin through art, through drawing, painting or writing.

“Why are you an artist?” asks “Half Woman’ behind camera, turning the same question over to her interviewer.  “I went through a lot growing up and art saved me, it was my company, my friend, it made me what I am today,” I say.

Her face lights up. This superhero who wants to be a counsellor to help people deal with difficult emotions shows me her dress – one side there are tears and on the other there are stars. She is a hero who deals with emotions and helps turn sadness to smiles.  “I know what you mean she says, I’m exactly like that too.”